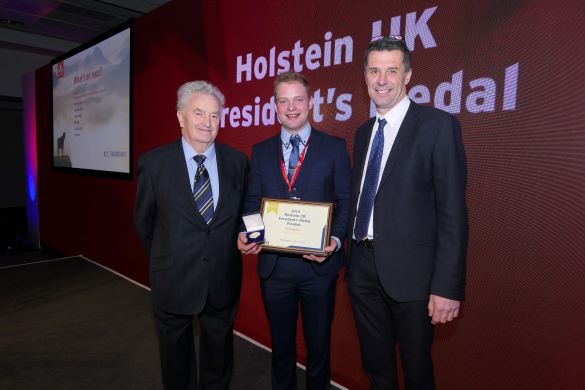 The prestigious 2019 President’s Medal Award was presented today by Holstein UK to Andrew Neilson from the Scotland Holstein Young Breeders Club. Andrew has won an engraved medal and a trip to the Royal Winter Fair in Toronto, kindly funded by HYB’s principal sponsor, Semex, later this year.  Holstein UK would also like to congratulate the two runners up: Cari Thomas from the Cornwall Club and Frances Griffiths from the Yorkshire Club.

Sponsored by Semex, the Holstein UK President’s Medal is regarded as an ‘Oscar’ of the dairy world; it recognises and rewards young talent and highlights individuals who are the dairy farmers of the future. The Award, presented at the Semex Conference in Glasgow, recognises a HYB member who has made an outstanding contribution to the breed, Holstein Young Breeders, and, in particular, their own Club.

The entry process started with each HYB Club being asked to nominate one young breeder aged between 23 and 26 years of age. Six young breeders were shortlisted for interview with the panel of judges, including Bryan Thomas (Holstein UK President), Lynette Steel (Industry Representative) and Rodger Mather (Semex Representative) following the submission of an essay entitled “What can all of us, as breeders who work in the UK dairy industry, do to reverse the trend of consumers choosing cows’ milk alternatives?”. Following the interviews, the final three were selected and the winner was officially announced.

Holstein UK President, Bryan Thomas, was one of the judges and commented on the winner, “All three candidates were very impressive and will undoubtedly be great ambassadors for the breed and the industry going forward. The other judges and I were very impressed with the standard of essays and the important points they all made regarding the future of the dairy industry.”

Hannah Williams, Head of Events & Marketing for Holstein UK, added, “We are very proud of our three finalists and would like to offer our congratulations to all of them. On behalf of Holstein UK and HYB I would also like to thank our principal sponsor Semex UK who continue to make a significant financial contribution to the advancement and success of Holstein Young Breeders.”