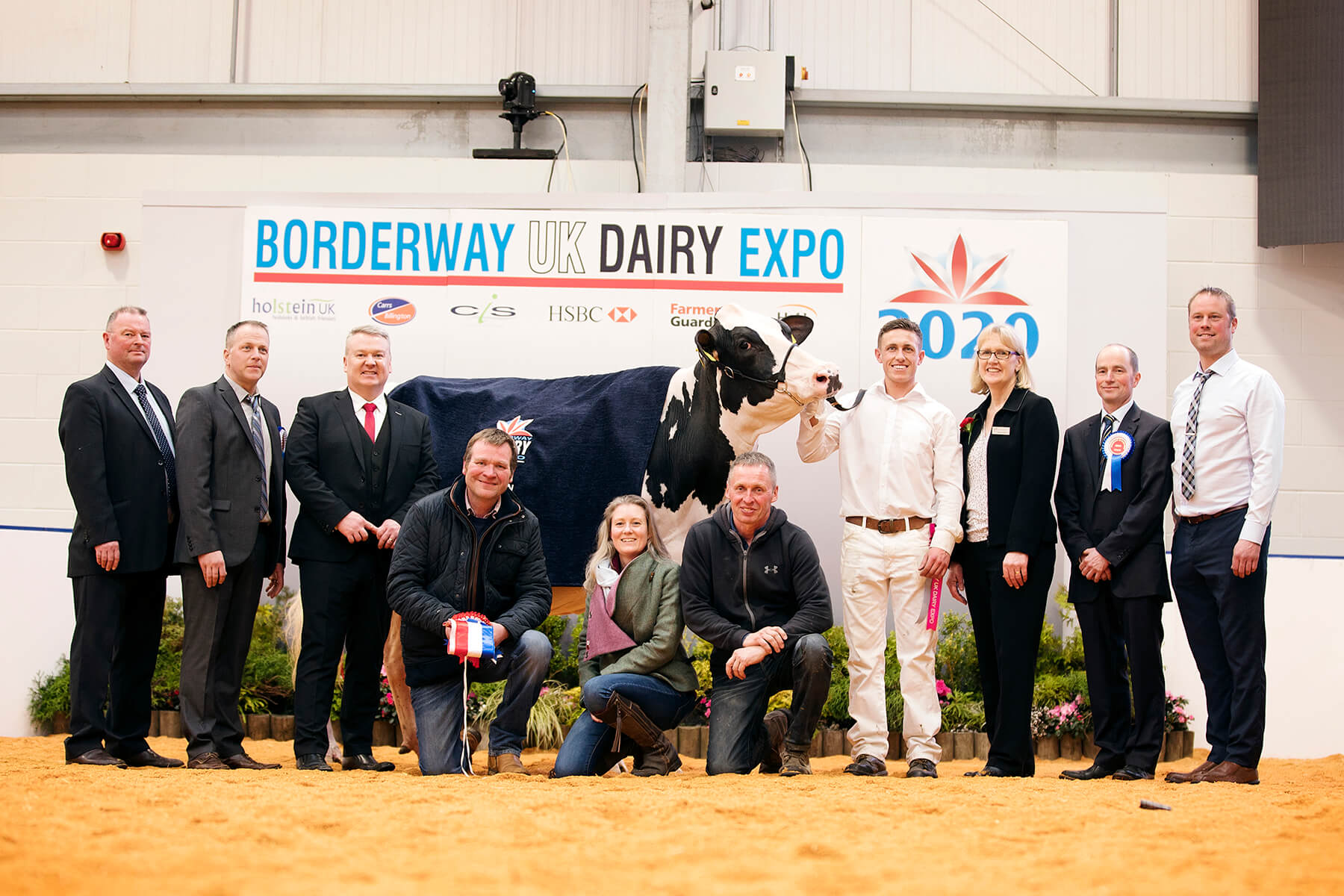 Borderway UK Dairy Expo 2020, held on 13th & 14th March by Harrison & Hetherington at Borderway in Carlisle, has announced this year’s Champion of Champions as Wiltor Silver Centrepiece, a phenomenal four-year-old Holstein cow, owned by Nick and Louisa Sercombe from Knaptoft Farm near Leicester.  Picking up the “People’s Choice Award”, a newly introduced element of the show for this year, was Hattie Hassall’s Brown Swiss Holdontoyourhats Bo Peep.

Highly regarded by the livestock industry as the showcase of dairy genetics and industry products and services, this year’s Borderway UK Dairy Expo overcame adversity to go ahead despite the nervousness surrounding Coronavirus.  Although numbers were down about fifty percent on recent years, this was still seen as an encouraging sign when taking into account how other industries have been immobilised by the virus and its consequences.

The lower footfall certainly did not dampen the enthusiasm and atmosphere on the day and the judges were astounded at the sheer quality of the livestock on display within the ring.  It was a difficult decision to choose one overall winner but the shining example on the day was Wiltor Silver Centrepiece.  On winning this prestigious accolade, owner, Nick said:

“We are absolutely thrilled to be taking home this award from what is without a doubt one of the best shows to win in the country and for us it is a once-in-a-lifetime achievement.  When Louisa and I bought this cow we knew it was a huge investment, however it was an investment we were prepared to make from both a showing and embryo perspective.”

“I would like to thank everyone involved for supporting us and the Jones family for looking her.”

And commenting on the overall champion, Judge Yan Jacobs, who travelled from Canada, said of the results:

“I knew that this was going to be a show of quality livestock, but I was really surprised at how high-quality the stock was, it was phenomenal, and I was very impressed by the show overall.

“The Overall Grand Champion was an extremely well-balanced dairy cow, and I believe that she is the kind of cow everyone needs today, whether operating a traditional or robotic parlour. She was  massive, she totally stood out and she can go everywhere.

“I thoroughly enjoyed judging such a prestigious event where everyone I met was extremely enthusiastic with a passion for what they do.”

Many were aware that this was most probably the last event of this type for many months and people were definitely making the most of it.  Speaking afterwards, Event Organiser and Joint Managing Director David Pritchard, at Harrison & Hetherington, said:

“Given the current situation with Covid-19, we knew that Borderway UK Dairy Expo, would be a smaller affair this year.  And I am pleased to say that despite this, we still experienced an extremely successful event, which proves that our decision to go ahead was the right one.

“I would like to thank all those attending, sponsors and judges for entering into the spirit of Borderway UK Dairy Expo regardless of the challenges and demonstrating that it continues to be seen as a key livestock event in the dairy calendar.”

A tremendous commitment came from the younger generation in the showmanship classes, under the watchful eye of Showmanship Judge, Amy Miller from Evesham.   Elliott Jackson (18) from Lancashire picked up the championship, the reserve went to Will Horsley from Cumbria (22) and the honourable mention was given to Rosie Dennison from Cumbria (18).

Attracting in the region of 3,000 entries through social and traditional voting, the People’s Choice Award was without a doubt one of the highlights of the show and the announcement received a huge applause.   The tension had built up throughout the event as the class was voted for by attendees through a new live online voting approach.    Jason Keen from Genus ABS, who sponsored the class, said:

“We were delighted it was a resounding success. The participation levels were great for the first competition of its type. The number of entries was encouraging and is something we can build on.

The winners from each breed were absolutely outstanding which made the competition more exciting, and for the younger generation, innovative social media such as this is the way forward.

“Votes were received from all over the world thanks to the use of social media, and this is something that would not traditionally have happened. It was a great event for British Dairying and Genus ABS was delighted to be involved.”

Another very important element of this dairy showcase is always The John Dennison Lifetime Achievement Award, which is presented in memory of the highly regarded breeder of Denmire Holsteins.  This year it was awarded to Blaise Tomlinson owner of the pedigree Sandyford herd of Ayrshire cows in Loughborough. On receiving his award Blaise said:

“To be named in the same breath as John Dennison is a massive honour.  John was a fantastic fella who was lost to this industry far too early. Looking at the list of all the previous winners, they were all great men of the dairy industry who won previously.  All have the same interest - all love dairy cows, all love milk producers, all love showing cows and being part of the showing world.”

Despite some exhibitors being unable to attend, due to these very challenging times, commenting on the day, Ian Oliver Commercial Manager for Carrs Billington said:

“Yes, the event was quieter compared to normal, I fully understand the reasons why and unfortunately it is a sign of where we are sitting at the moment.  These are difficult times, however I just want to say that as agricultural suppliers, through all of our Carrs Billington stores, we are very much here to support the agricultural and rural communities during what is one of the busiest times of the year in farming. So, if you are concerned about coming in person to one of our stores please do pick up the telephone, as we are open for business and here to help and support everyone.”

The 2020 Breed Champions are as follows: