The Howard Sneesby Memorial Trophy is awarded at the National Holstein Show to the person who has made a significant difference to others through constant support and encouragement. The winner is chosen by the Holstein UK Show & Sale Committee. 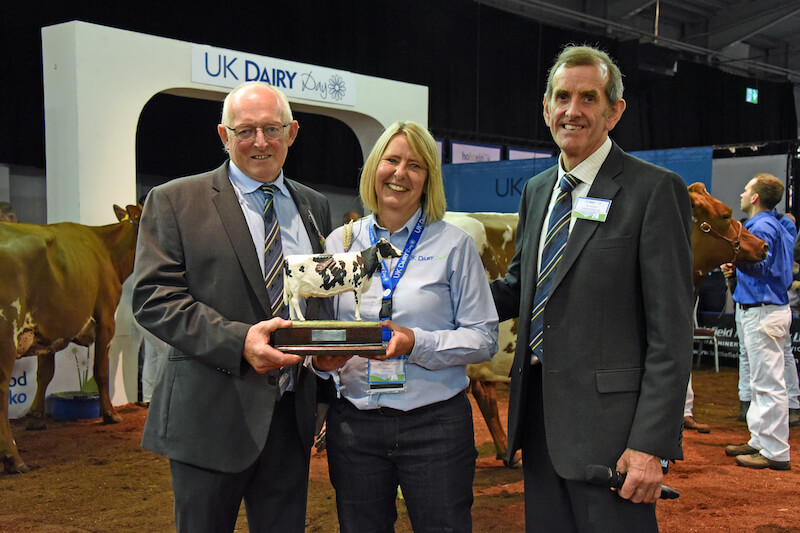 The winner of this year’s Howard Sneesby award is Holstein UK CEO Sue Cope who was presented the award for her enormous contribution towards the National Holstein Show over many years. The award recognises an individual who has made a significant difference to others through their support of the National Holstein Show, and Holstein UK’s Show and Sale Committee determined that Sue would be a very worthy winner.

Having been a member of Holstein Young Members in her early years, Sue’s achievements included winning the prestigious Presidents Medal and she has spent many years showing with her dad and brother under the Huddlesford prefix. Sue began working for Holstein UK in 1995 and throughout her career, she has worked across a variety of roles. Sue has been heavily involved with UK Dairy Day since its inception and has been Event Director for the past seven years. Her commitment to the National Holstein Show has enabled a showcase of world-class Holstein genetics on a global platform.

Michael Smale, Holstein UK Chairman, commented “I am delighted to present the Howard Sneesby Award to Sue Cope. Sue is an integral part of the National Show which wouldn’t be possible without all of the hard work she does behind the scenes.”

The award was not presented due to COVID-19. Holstein UK, organisers of UK Dairy Day, were delighted to present the 2019 Howard Sneesby Memorial Trophy at this year’s event. The award recognises an individual who has made a significant difference to others through their support of the Holstein National Show.

The Holstein UK Show & Sale Committee were delighted to select Carl Smith as the winner of this wonderful accolade. Carl from Preston, Lancashire, has been involved in farming from a very young age and understands the dairy sector inside and out. Throughout his youth he was heavily involved in Holstein Young Breeders before becoming the Coordinator of the Lancashire Club. This led to Carl sitting on the Board of Trustees for eight years on the Show & Sale Committee where he was extremely instrumental in the very first UK Dairy Day in 2014. Since the first event, Carl held the position of Show Director for five years and retired in July this year from the Board. Carl has received great success on the show circuit, winning many major shows and alongside his formal commitment to Holstein UK, Carl has been a fitter on the global show circuit. He now farms his own herd of Holsteins under the Inspired prefix with the help of his wife Jane and twins Liam and Alicia.

Sue Cope, Holstein UK CEO, commented “From the ideation of the very first UK Dairy Day in 2014, Carl brought the event to fruition and was instrumental in making it happen. He was a huge supporter of each event and held the position of Show Director for five years before retiring from the Holstein UK Board of Trustees in July 2019. I am delighted that Carl has received such recognition for his devotion to the event and has been awarded with the Howard Sneesby Memorial Trophy which is the perfect platform to acknowledge the unsung heroes of our industry”.